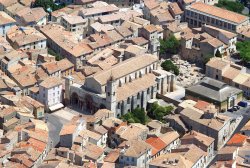 The legend of Giles 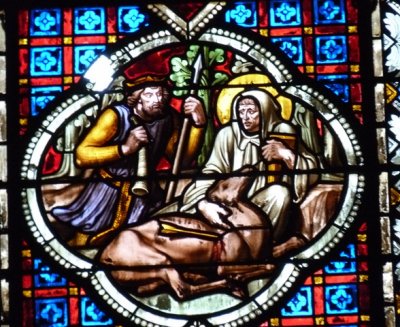 Cleverly devised towards 1000 AD by the monks themselves, the legend holds that Aegidius, a Greek of a prominent family and a native of Athens, left his country to escape the fame generated by his ascetic life and the many miracles that he performed. He travelled via Rome and Arles and then withdrew to the banks of the Gardon with the hermit Veredemus. However, Gilles left in quest of another hermitage that he found near the estuary of the Rhône in the valley of Flavius, the Visigoth king, or Wamba according to a variation of the legend that says that during a hunt a doe took refuge with Gilles. Moved to find that the hermit had been wounded by a hunter’s arrow, the king gave him the ’Flavian Valley’ and encouraged him to build a monastery there.

The history of the town

Lying north of a classical town identified as the Greek Rhodanousia, St Gilles was a medieval settlement that grew from the eleventh century onwards thanks to its influential and prosperous Benedictine monastery. Mentioned as existing in 814 and of uncertain origin, the abbey’s considerable fame resulted from the pilgrimage to the tomb of its legendary founder, called on to free prisoners and heal infirmities and illnesses. Meanwhile, trade brought prosperity to the town and it became an important Mediterranean port. Merchants, travellers and pilgrims setting out for the Holy Land made this fortified town lively, ensuring the renown of the saint and the town, owned by Raymond de Saint-Gilles, Count of Toulouse, one of the leaders of the first crusade. In the twelfth century, Saint-Gilles became the fourth most important destination for medieval Christian pilgrimages after Rome, Jerusalem and Santiago de Compostela. Today, the abbey church and the fine medieval mansions in the historic centre show how wealthy the town has been.