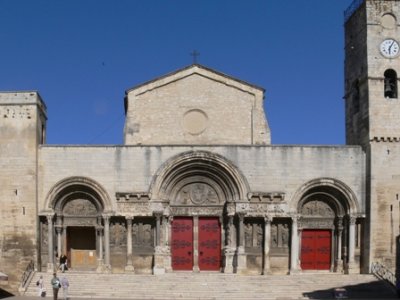 Although records made show that there were three old churches, one of which housed the tomb in its position since the tenth century at least, the present abbey church would have been built during the last third of the twelfth century and completed in the thirteenth, with donations of pilgrims who already came for the cult of St Gilles.

95 metres long with a façade 33 metres wide with a 40-metre transept opening on to a choir with an ambulatory, the building was above a vast lower church according to a rare architectural plan for the region and on the scale of the great pilgrimage churches. Violent fighting during the wars of religion [1] in the sixteenth century resulted in serious damage to the upper church.

Rebuilding was undertaken in 1650-1655, but with a building on a smaller scale as the damage was too serious, financial resources were limited and the cult of St Gilles had been forgotten. Although the choir and the remains of the cloister were abandoned and dismantled, the present abbey church is still one of the most remarkable masterpieces of its time. A listed historical monument since 1840, it has been on the UNESCO World Heritage List since 1998 as a stage on the routes to Santiago de Compostela.

Built in the last third of the twelfth century on a base built with the crypt, the façade is a like book made of stone, designed to teach and sublimate Catholic dogma. The finesse of the sculptures, the elegance of the figures and of the drapery, the rich decors and the classical ordering of the three portals make the façade one of the jewels of Romanesque art in the lower Rhône region. It was strongly inspired by Roman monumental and funerary art, linked with the major centres of such art from northern Italy to Aquitaine.