Saint-Gilles is greatly attached to its region with its emblematic Camargue cross and bull traditions.

Saint-Gilles is greatly concerned with keeping its traditions alive and the whole town lives following the pace of its “abrivado”, its “feria” and its famous bull games. But the town also has its originality by carrying on the Provençal tradition of the “pastrage” at Christmas. Enjoy some unique experiences in Saint- Gilles and be part of the true Camargue spirit! 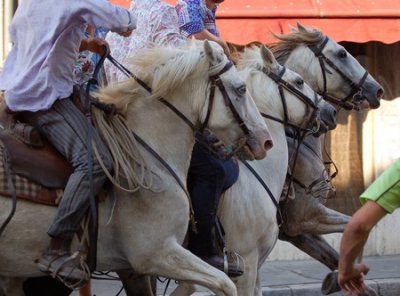 A bit of Camargue vocabulary Abrivado The “gardians” surround a herd of bulls on horseback and lead them from the pastures to the town centre arena for the afternoon bull games.

Bandido The “gardians” lead the bulls back to the pastures at the end of the afternoon after the bull games.

Encierro Running of the bulls through the streets.

Ferrade It is the branding of young bulls with the symbol of the “manade”.

Raseteur Name given to the man dressed in white who challenges the bull during the “bull races”. His aim is to grab the cockade ribbon between the bull horns.

Tienta It refers to the cow that fights during a non-lethal bullfight; it is a way to select the most suitable cows for breeding fighting bulls.